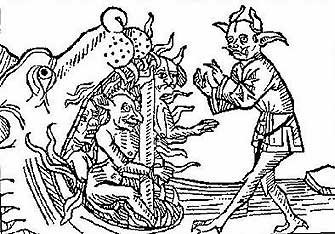 Dear S. Connolly: Do I invoke the demon I’m working with before Satan in the circle or after Satan? Someone told me to do it before, while I understand some articles say after. This is very confusing.

Answer:  In the standard, elemental ritual construct, in my tradition at least, Satan is the 5th element and comes after the first 4 elements invoked. Then you invoke the Daemon you are working with. Or, in some cases you might skip Satan (or your equivalent 5th element) and invoke the Daemon you’re working with.  The entire point of the standard construct is to create a balanced space in which to work with Daemonic energy.  So there is a reason for calling on the four (or five) elemental kings to begin with.  It’s not just because “I said so”.

See, Daemons are intelligences of pure energy. How you mix them matters in the alchemical/magickal sense. They’re not sky mommies and daddies, or invisible humans with super powers, which is how a lot of people treat them. So imagine the elemental circle like a battery. You activate the battery in a sequence. If you throw something new into the sequence, it changes the charge.  If you want Asmodeus (for example) to be the focal point of your ritual, he’s not part of that elemental sequence construct.  The circle serves the purpose of balance. The actual Daemon you’re working with is the purpose – the focal point – of the ritual.

In this construct, the elementals (including Satan) and Asmodeus have separate functions in the construct of the rite. By putting Asmodeus before Satan, you place him in the balancing construct, and Satan as the Daemon for the focal point.  The last Daemon you invoke should always be the one you’re seeking to work with — in this particular ritual construct. I hope this makes sense!

S. Connolly – Is it true you actually said to use the Christian bible to force demons entities into submission?

Answer – That’s not what I said at all. Though I can see why someone who is very inexperienced and/or new to magick,  or one who cannot see beyond Christianity might think that. What I was saying, and perhaps I wasn’t clear, is that if you look at Christian magick, like in the grimoires, the alleged Names of God are “stolen” from Canaanite and other pre-Christian sources, so technically by using those names or vibrating them during ritual, what you’re doing has nothing to do with “Jehovah” “Yahweh” or even Christianity etc…  You’d actually be vibrating the names of deities older than Christianity (of which many Daemons ARE the deities of older-than-Christian religions, EL included) and drawing their influence into the ritual.  You’re not constraining or binding anything against its will. (Trust me, if Daemons want to kick your ass, they will, whether you shout Jesus at them or not.)

The idea that names of deities can constrain other deities is about “tempering” influence.  Magick is a lot like cooking. So look at every Daemon you bring into a ritual as part of a recipe.  You add specific things at specific times to your recipe to produce the desired result. Some things you add sparingly so it’s not too strong. Other things you add in excess because you can spice it up with other influences. When you’re done, hopefully you have something wonderful and effective for your purpose. That’s probably a labored metaphor, but spirit/energy influence in magick works much the same way. It’s an alchemical mixture of energy meant to manifest in a way that coincides with your will.  Sometimes it needs to be precise for the most effective results. Sometimes you can get by with a general mixture. It’s the precision of how it’s mixed that separates the great magicians from the so-so ones  (just like cooks – not everyone is a master chef, but you could learn to be one by minding your recipes and experimenting).

Of course there will still be people who choose to believe I’m secretly a Christian. Haha. I assure you I am not.  While I have experimented with vibrating some of the “God Names”, it’s not part of my regular practice.  I have also been known to occasionally work with angels (which I see as a type of Divine Intelligence, i.e. Daemon).  I’m a magician and it would be foolish of me to poo-poo or admonish a technique or paradigm if I haven’t tried it. That amounts to hubris IMO.  And yes, in a GENERAL magick book I wrote called Curses, Hexes, & Crossing, (which was not a Daemonolatry book) I did include the Psalms for cursing.  In case some of you didn’t know it, a lot of the Psalms in the bible were hijacked from older traditions, too. A lot of magickal traditions that combine Catholicism and magick use the Psalms in magick. And since the book was a general book about magick I included curses from ALL traditions and from various cultures. Everything from Traditional Witchcraft, to Daemonolatry/Satanism, to Khemetic, and, of course, Christian.  Magick is a practice that spans all cultures, traditions, and centuries. I study magick as a whole, not just a tiny area of it. So writing a general magick book in the area of execration magick was only a matter of time for me. Hate me for not being biased if you must. The Daemonic doesn’t give two shits one way or another. No – really – they don’t. They don’t have the same petty, emotional, ignorant hang-ups that people do.  We project our own personal hang-ups, ignorance, and pettiness onto them. We create them in our own image because we cannot fathom them in any other way.

So that’s it for this post! I hope you’ve found my answers helpful.