So a friend of mine who runs his own occult shop was rotating his herb stores last month (nothing old and nasty in his store). He asked me if there was anything I wanted. I told him I could really use some High John. I’ve been needing some extras to do some experimentation in the lab. He brought me an entire bag.

I figured my first task was to make some High John oil to feed the roots. So first I took all the small roots out of the bag, charged them with my intent, consecrated them, and put them in another plastic bag and took them out to the garage. Pulling a hammer off the tool peg, I put my bag of small roots on the ground and used the hammer to break them up. The first picture is them broken up in their bag. 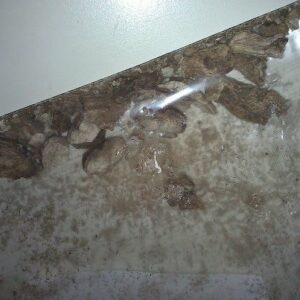 Then I simply sat down and poured the root pieces and powder into a mason jar. I only had olive oil in the house (I usually prefer grapeseed oil since it’s lighter) so I poured about one cup of oil over the broken up roots in the jar and I’ll let it steep for about a month before I start using it to feed my other roots (also shown in the next photo).  I might keep one of these roots for grating and another root for tincture. When you get roots in bulk like this, keep the elongated ones for sex magick (they’re more potent) and the rounder ones for other things. Of course I’ve also heard that all the longer ones are more potent despite the type of magick you’ll use them for, due to their phallic shape.

Do not forget to label your jar!

High John oil can be worn when you want to be in control of your situation or seek to bend others to your will (or you simply want a positive outcome for yourself). High John is about strength and overcoming obstacles (other people type obstacles).  The roots can be used in magick along the same vein and are often a common ingredient in binding spells. I don’t throw my roots away. They get stronger with each subsequent use and continual charging. A Traditional Bend: Sometimes teachers will pass a well used root to their student(s) to start their student off with at least one really potent root. My teacher did it for me and I gave my oldest most potent root to one of my students. And so it goes. It’s the hope that eventually someone is going to end up with a very old and potent root. 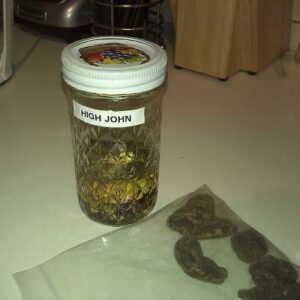