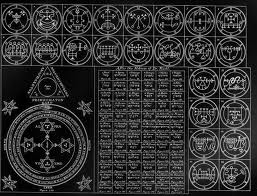 Over the past few years I have been heavily criticized for my book “Daemonolatry Goetia” because I basically took the entire Goetia out of its historical context, modified it for Daemonolatry magicians (who prefer to respect the divine intelligences they work with), and gave the Daemons/Spirits updated attributes for the modern age based on my own personal work with said Daemons/spirits. I still stand by my work and don’t mind the criticism. Bring it. What others think about my spiritual leanings or practices isn’t my problem, it’s theirs. But sadly it does matter to a lot of younger, maybe more inexperienced magicians who feel pressured to conform.

Evidently what I did with “Daemonolatry Goetia” was a huge no-no because somehow, my little book of modification (for Daemonolaters) got rather popular among even more mainstream magicians, and that pissed off a lot of old-school grimoiric magicians whose emphasis on tradition, history, and “one-size-fits-all” dogma doesn’t “sell” as well. Evidently those of us who think outside the box and don’t do things their way are “stupid” and “lazy”. (Of course.)

Mind you I don’t mind pissing people off. I’ve been proudly pissing off the religious right AND left since 1999. I will NOT stop writing books about magick or sharing my ideas. Love me/my work or hate me/my work – I’m not going anywhere folks. Suck it up, buttercup, and deal with it.

My techniques work for me and hundreds of other magicians. In my little magickal world, manifested results and personal experiences trump history and tradition. Sorry if that upsets people. The assumption that magicians from 100AD (or whenever) had more method to their madness than today’s modern magicians who are writing today’s modern grimoires is a lot of bullshit. Many of the occult authors I know have a very solid foundational knowledge of old school magick. They just realized that magick is not stagnant. The old grimoires were great for their time. But technology, and human sensibilities and priorities change as the centuries and decades pass. Something very relevant hundreds of years ago may not be as relevant today. I don’t think the Gods/Daemons exist in a vacuum. I believe they tolerate change rather well.

Just because modern magicians creatively apply their thinking to magick (and perhaps even throw out old traditions) doesn’t mean they didn’t develop their system based on trial and error. I worked a great deal of magick, tested it, built on it, and used deductive reasoning AND personal experience to come up with techniques that work. Now will my techniques work for everyone? Probably not. However, my techniques, modified, might. In the very least they will inspire someone else. Hence the reason I publish what works for me.

Why this pisses some people off is a mystery to me. Other people’s spiritual growth and practice is none of their damn business, so perhaps they should get off it already. Just because it pisses them off that I’ve taken the Goetia out of historical context to make it more workable for those who want to respect the spirits gives them no right to tell me that my methods are lazy or flawed. Those methods work for me and enhance my relationship with the divine, and that is none of their damn business either. This goes for every occult author and every magician.

Mind your own business instead of everyone else’s and quit worrying about selling your ideas to everyone else.

It takes massive hubris (which admittedly most magicians have in spades, myself included at times) to assume one possess the ONLY correct way of anything when it comes to the subjectivity of magick and spirit work. I’ve actually conversed with the spirits about my magick and they seem to be okay with it. Of course my critics would likely just say I’m a flake and maybe have some kind of disorder because my methods don’t match theirs. So I’m the quack, or the lazy magician. I get it. It makes them feel superior to call me names and push me around for being different. I could be a “school yard bully” or an internet troll too, if I wanted to be.

Also, all the snarky comments about “stupid Americans” haven’t been lost on me either. I get that many of my critics are rather chauvinist, provincial, or xenophobic. I’m sorry they feel that way. While I agree the United States does have its fair share of idiots (don’t we all), the hardcore practicing magicians are generally NOT within that group of people. Most, if not all, of the hardcore magicians I meet (and by hardcore I mean those who actually practice, not sit around waxing philosophic about it, or only performing in front of an audience) are highly intelligent people perfectly capable of making up their own minds about whether they want to follow the herd like blind automatons, or think for themselves and come to their own conclusions. I give my readers credit for being intelligent and being able to use deductive reasoning. I don’t need to tell them what to believe, and perhaps that’s why Daemonolatry Goetia has become so popular. I’m giving magicians permission to flex their creative muscles and step outside the box.

After all – magick is about creation. Real magicians create.

I always like to ask my critics a few simple questions when they start going off on me about how their by-the-book, historically accurate magick is better. 1. Is magick a creative process or not? 2. Is Magick about conformity? 3. Is Magick all about research, memorize, imitate/regurgitate, repeat? 4. If you are creating your own life and transforming yourself via magick, doesn’t that give the magician some creative license? After all, as above, so below. None of us grows in the exact same way(s) as our neighbor.

By-the-book Magick, imho, stagnated my growth, which is why I abandoned it early on in my career as a magician. Sure, know your roots, have foundation, know what magicians before you have done, and then take that knowledge and apply it in a way meaningful to you to connect with the divine, and transform your self and your life. Just because not everyone has a boner for old grimoires doesn’t make them any less a magician or lazy. Quite the opposite in fact. IMHO, having others do the work for you and you simply following their books to the letter is lazy. Eventually you have to grow past that. Eventually most serious magicians do!

Also, it could be argued that focusing on the details like history and tradition is just an excuse to sit around waxing philosophic instead of getting into that magick circle and getting one’s hands dirty. Go ahead — think outside the box. Modify to your heart’s content. Sure, sometimes it won’t work, but sometimes it does, and when it does, you can pull it apart and figure out why it does and begin building your own “personal gnosis”, which isn’t the dirty little phrase everyone makes it out to be.

By-the-by, I don’t wish the by-the-book grimoiric magicians any ill. Personally I don’t care what they do because it doesn’t concern me. If their practice works for them and they’re getting results from their by-the-book magick – awesome, but them trying to browbeat others to conform to their ideas is rather annoying. It reminds me too much of evangelical Christianity. Can’t we all just live and let live? I have my magick, my critics have theirs — and I’m okay with that.  It’s sad, and it speaks volumes, that they aren’t.