I was having a conversation with a friend last week about necromancy and the thinning of the veil. He made a passing comment about how October 31 is when the veil is thinnest. I had to stop and correct him because that’s not entirely true.

So while the veil may always thin a little bit around October 31, it actually peaks around the second week of November and is really only at its thinnest point every 28-30 years.

And guess what? This year we entered a Saturn in Scorpio cycle (transit)! It started around October 5 and it will last until 2015.  Yep – that’s right! Saturn is currently in Scorpio! So for those necromancers who are really feeling it this year – this is why.  While a good necromancer can do his/her work at any time, the next three weeks will be prime for it.  Not just tonight. You’ll also enjoy this influence over your necromantic work until [January of] 2015! 🙂

Good luck in all your work and may the Death Daemonic be friendly unto you! 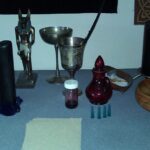