This notice is for the GenDems who use this site. As official Sesh I am proud to announce that I have come close to completing the directive from the GenDem council and there is now a new group resource section specifically for those who practice denominational Daemonolatry.  All of the articles are written from a traditional GenDem perspective. I’d like to thank ALL of the writers who contributed to this section! Thank you!

For everyone else – I have already gotten one complaint about this section. As a matter of fact, the young man was so pissed off we were putting it up on the site that he called me arrogant, the Daemonolatry Pope, and said I was stifling the spiritual growth of hundreds of people. I had no idea I had so much power.  He also said I was ruining all of Demonolatry for everyone by doing this.  LOL! This is for him (and those who agree with him): 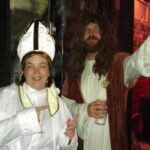 What? I have a sense of humor. Besides, I make an adorable pope. Even with red eye. 😉

So for those who are vehemently pissed off (evidently at least one guy) about this, please know that so far, this website has CATERED to non-denominational Demonolatry despite the fact that it’s ran by a group that is denominational. As a matter of fact, IMHO, we’ve shied away from really adding any additional denominational stuff to this site for fear of upsetting anyone and that’s not right either. We shouldn’t have to do reverse discrimination in favor of non-denominational folks either. Everyone should be welcome.

Besides, the rest of you are more than welcome to that section as well. Or you’re welcome to ignore it if you don’t like  it or it’s not for you . It’s really that simple.  By including it here no one is saying a personal Demonolatry is wrong or being non-denominational is wrong. It’s just that the groups were requesting some resources for guidance and we decided to comply with that request.

The solitary Demonolaters who are non-denominational are more than welcome to request things for this site, too. If you have a request, sent it to Frank D. at demonolatry.org@gmail.com.

Also a side note – we have quite a few bloggers here who would identify themselves as non-denominational solitaries.  I point that out because this site really is inclusive of everyone and we plan on keeping it that way. 🙂