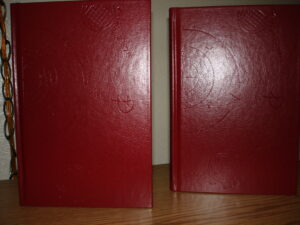 demonolatry.org has recently obtained the LAST COPIES of the bonded leather edition of Keys of Ocat published by Nephilim Press.

The Keys of Ocat reveals the never before published Saturn rites, seals, and theophantic gate opening rituals of Ocat, the abyssal gatekeeper of the dead. Behind His gates dwell the Daemons of death including Euronymous, Balberith, Bune, Hekate, Frucisierre, and many others. These blood magick rituals, talismans and seals will aid the advanced magician in conjuring Daemons to speak with the dead, commune with death, and discover the true meaning of mortality and spiritual immortality. Be forewarned, however, Ocat is not known to be a friendly gatekeeper to all magi who approach Him, and the Daemons behind His gates are some of the most terrifying of their nature.   READ AN EXCERPT

These Deluxe Editions of  Keys of Ocat are 6″x9″, heavy cream, smythe sewn, archival quality paper.  It is bound in Red Leather with a shallow embossing of a necromantic formula on the cover. The Deluxe Edition, limited to 200 copies, contains a silver place marker ribbon and each one was autographed by the author.

For us here at demonolatry.org, the author consecrated each book individually with a special Oleum of the Death Daemonic during a necromantic ritual in honor of Euronymous with the gate of Ocat open on August 10, 2014.